Hey guys! Today I'm really excited to show you my very first original book tag. One thing you need to know about me is that I absolutely love Disney. Like seriously, I love Disney probably as much as I love books. So it really was a matter of time before I combined both on my blog.

And now, without further delay, let's get started with the tag! (So excited ^_^) 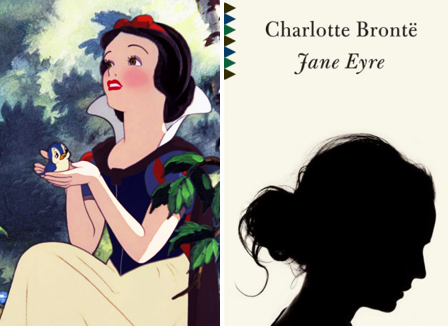 For this I'm going to pick Jane Eyre. This ageless masterpiece by Charlotte Brontë has everything from awesome character development and well-plotted storylines to beautiful descriptions and a recurring deliciously spooky atmosphere. My favorite classic by far.

2. Cinderella - Name a book that kept you reading well past your bedtime 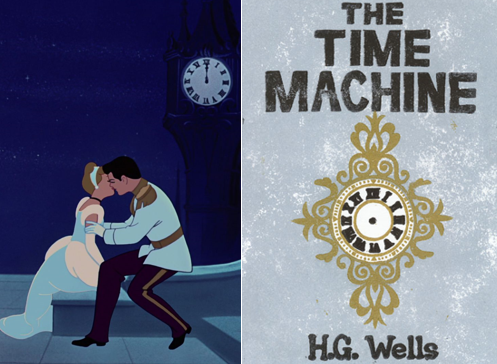 This was a recent read and it is The Time Machine by H.G. Wells. This is one of the first books ever written on time travel and is actually where the term 'time machine' came from. The book follows the story of a 19th century man who builds a time machine that takes him thousands of years into the future, well past our current century. This was a fairly short book with less than 120 pages and it was so fast-paced and interesting that I stayed up till 3.30 am just to finish it. Also, isn't it cool how both pictures feature clocks? 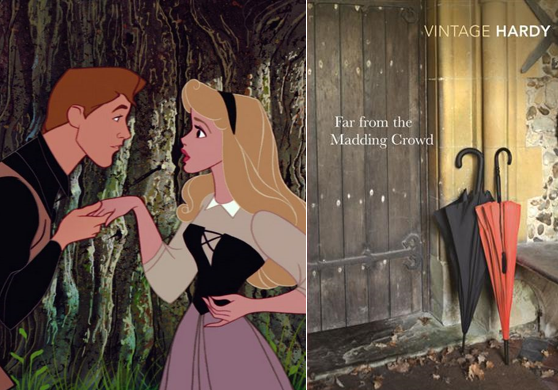 Since I've already mentioned Jane Eyre, which remains a top contender for this category too, I'm going to go with Far From the Madding Crowd by Thomas Hardy. This book follows the story of Bathsheba and the three men who enter her life, each coveting her love. This book not only has fabulously written romance, but it also has awesome character development and very strong intertwining storylines. Considering the fact that I usually avoid romance novels, and that I ended up giving this book 5 stars on Goodreads, you might want to pick this up if you're looking for a good classic romance.

4. Ariel - Name a book that's about making sacrifices and fighting for your dreams 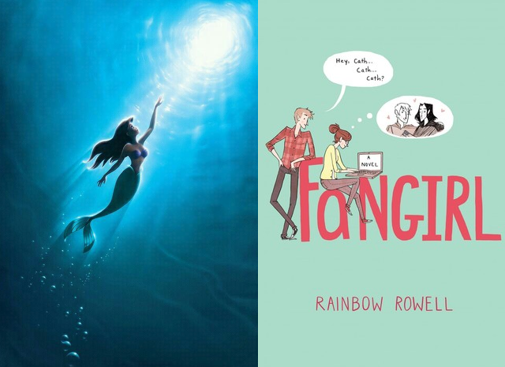 For this one, I chose Fangirl by Rainbow Rowell. When we first meet main character Cath, she is a shy and socially anxious young woman who is quite unsure of herself and struggling to adapt to college life. As the story progresses though, we see Cath overcome her initial shyness and fears and slowly begin to realize her dream: to become a writer. Just like Ariel's, Cath's story is about growing stronger and finding strength within.

5. Belle - Name a book with a smart and independent female character 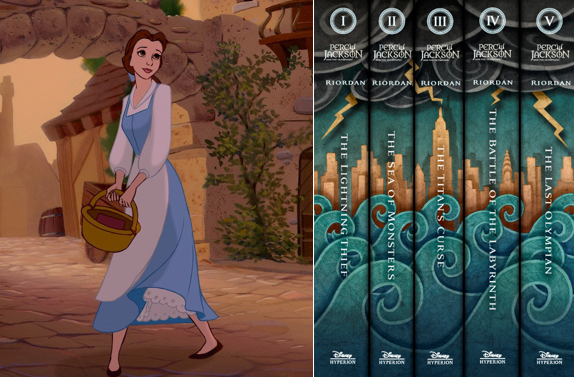 For this I picked the Percy Jackson and the Olympians series by Rick Riordan. These books feature a wide cast of characters, many of which are the demigod children of the Greek Gods. One of these characters is Annabeth Chase, daughter of Athena, the Goddess of Wisdom. Annabeth is the second main character right after Percy and is not only very smart but she is also a skilled fighter. Indeed, throughout the series, she stands as Percy's equal in fights, using both her training and wits to escape villains and save her friends. Smart and kickass, Annabeth is one of the best characters in this series.

6. Jasmine - Name a book with a character who challenged the social conventions of his or her world 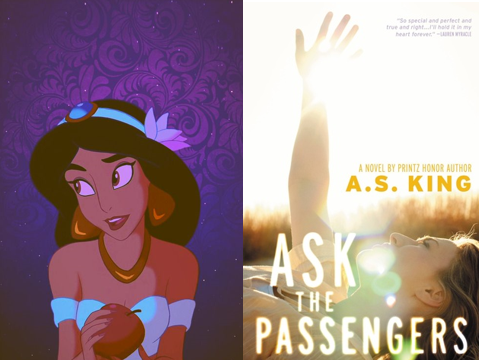 Remember when Jasmine stood up to her father and said 'I am not a prize to be won?' Astrid, from Ask the Passengers by A.S. King, is an equally strong young woman who gradually learns self-acceptance and grows stronger throughout the book. When she falls in love with a girl, Astrid's life starts to unravel beyond her control. The fact that she lives in a town full of gossip and short-mindedness only complicates things further. But it's really when Astrid finds herself cornered by the conventions and prejudices around her that her personality starts to shine through.

7. Pocahontas - Name a book whose ending was a roller-coaster of emotions 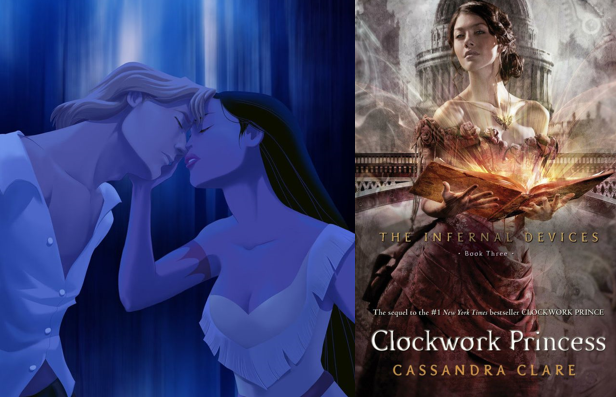 For this I just had to pick Clockwork Princess, the last book in the Infernal Devices trilogy by Cassandra Clare. I can't really talk about the book's ending without spoiling everything but if you're interested in reading this series or you're currently already reading it, know that this book has one of the best written endings ever. All character arcs conclude beautifully, loose ends are properly dealt with and you also get to see what happens next for the characters you've grown to love throughout the series. Plus, both the book's ending and the last scene in Pocahontas made me tear up, so there's that too.

8. Mulan - Name a book with a kick-ass female character

For this I'm going to go with the Saga graphic novels by Brian K. Vaughan and Fiona Staples, featuring Alana, one of the fiercest female characters I've ever read about. Despite being from enemy races, Alana and Marko fall in love and get a child together. As a galactic war rages on and enemies close in to apprehend them, Alana and her family soon find themselves fighting for their very survival. Alana is not only an ex-soldier, but she is also a woman with a very strong personality, making her both protective of those she loves and ruthless to those who come after her family. 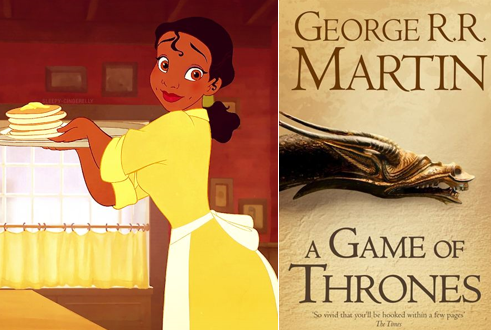 Unlike most Disney princesses, Tiana didn't fulfill her dreams merely by wishing upon a star, nor did she had help from some Fairy Godmother. She rolled up her sleeves and went on to work hard 'cause that's how dreams come true in the real world. Daenerys Targaryen, from A Song of Ice and Fire by George R.R. Martin, learns this the hard way when she is thrown against her will into an arranged marriage with the ruthless and almost savage Khal Drogo. While she is initially a quiet and seemingly fragile girl, she eventually gains confidence in her role as wife to the Khal and as the series progresses, through her willpower and courage, she goes from powerless exiled princess to powerful queen and conqueror, eventually becoming one of the fiercest characters in the entire series.

10. Rapunzel - Name a book that features an artist If I Stay by Gayle Forman features several characters who have artistic backgrounds. Main character Mia plays the cello, her boyfriend Adam is the lead singer in his band and Mia's parents have lots of friends in the music sphere, mostly due to Mia's dad being a singer in his youth. From classical music to rock, this book has a strong musical background which is an engrossing as the main plot itself.

11. Merida - Name a book that features a mother-daughter relationship 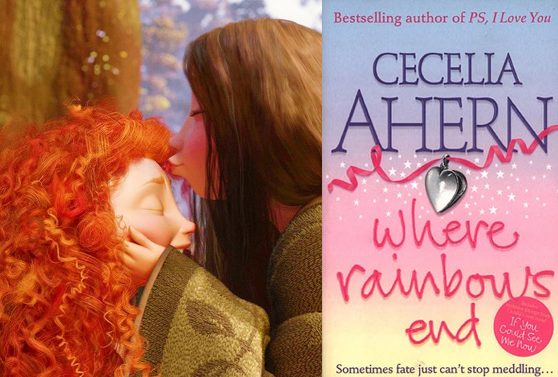 For this I picked Where the Rainbows End by Cecelia Ahern. This book is also known as Love, Rosie and was recently made into a movie. You might want to move to number 12 directly if you don't know the story of the book/movie and don't want to be spoiled. To read the spoiler section highlight the following passage. *Start of spoiler* Rosie's life is turned upside down when she accidentally gets pregnant after sleeping with a guy on prom night. Her decision to keep her child will forever change her fate as she slips into adulthood practically overnight and embraces motherhood while she's still figuring out her life. Rosie is hellbent on being a good mother though and the book follows her story as she slowly gets the hang of motherhood and slowly carves her way into the world. *End of spoiler*

12. Anna and Elsa - Name a book that features a great relationship between siblings For this I picked the Pevensie siblings from the Chronicles of Narnia by C.S. Lewis. (Sorry Cersei and Jaime. You don't actually qualify). It's wartime and siblings Peter, Susan, Edmund and Lucy are sent to live with an old professor until things get better back at home. After Lucy finds a passage to the magical world of Narnia, the four siblings discover they feature in a prophecy predicting their roles as the saviors of the land. Through dangers and adventures, the siblings thus set forward together to defeat the White Witch under whose spell Narnia has been suffering for a century.

Aaaand that's it for my Disney Princess Book Tag guys. If you enjoyed this post, consider yourself tagged! Just don't forget to link your post back to mine and to leave me a link to your post because I'd love to see the books you would pick. Also feel free to comment down below to let me know what you think of my tag!

If you love Disney Princesses and books, you might also want to check out a similar tag created by YouTuber TurtleSympathy but which features different princesses and different questions.

I wish my hair could do that...

Email ThisBlogThis!Share to TwitterShare to FacebookShare to Pinterest
Labels: Book tags and memes