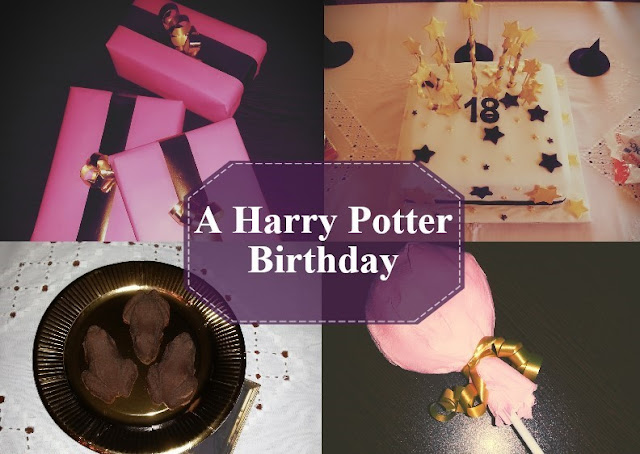 Hey guys. So some of you might have noticed that I was quite absent these past two weeks, with me not posting anything and not replying to your comments. Well, the thing is that I've actually been super busy organizing a surprised birthday party for my little sister, Pooja, who turned 18 this year. I might be moving out next year for uni and if I do, I'll end up missing her birthdays for at least a couple of years. So, to make up for the birthdays I'll be missing and to leave her with good memories for the years when I won't be here, I decided to turn our house into Hogwarts and throw her a Harry Potter themed party. 'Cause not only is she a Potterhead too, but it's also not everyday your little sister turns 18! 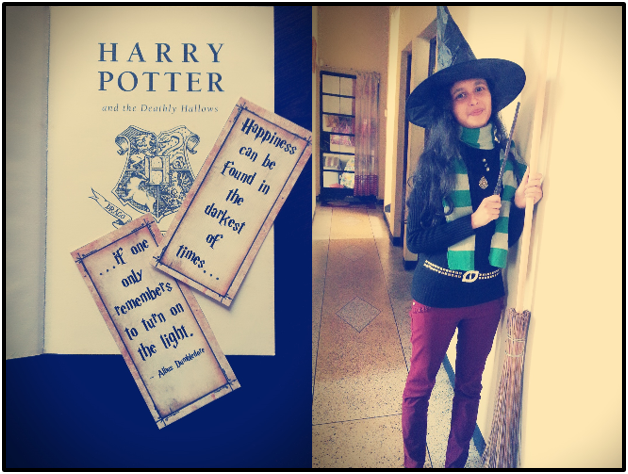 My sister and I have been Potterheads since always. We've fangirled together over many series but Harry Potter remains our shared favorite. While my favorite Hogwarts House is Gryffindor, Pooja is totally a Slytherin. 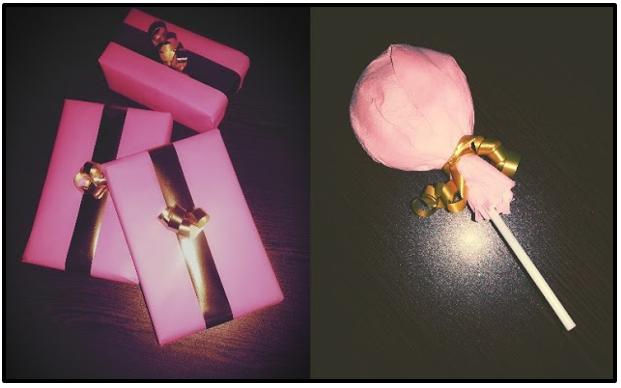 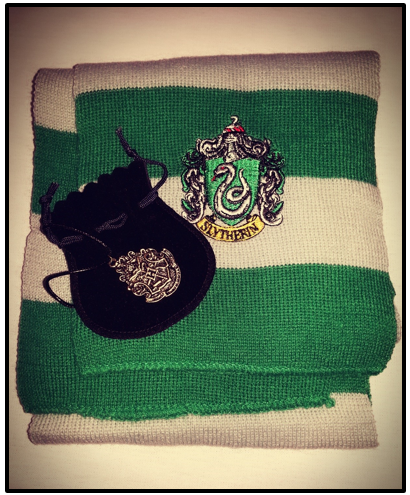 Apart from a bunch of other gifts, I got my sister a few Harry Potter stuff too, including this Slytherin scarf, and the Hogwarts pendant. Both the scarf and the pendant comes in different designs for the different Houses. You can find them on eBay at relatively low prices by clickling on the above links. 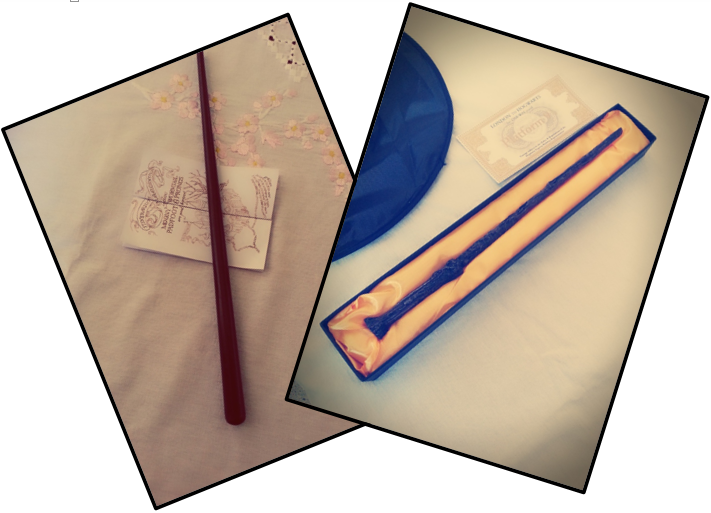 And since you can hardly call yourself a witch unless you actually own a wand, I just had to get Pooja her own. I got her Harry's wand (right picture), which I found on eBay here. This store also sells the wands of other characters such as Sirius, Snape, Dumbledore and a bunch of others. My wand though (left picture) was custom made by a friend of my dad's out of mahogany wood. Also, can you spot the Hogwarts Express train ticket and the Marauder's Map in the pictures? I made both myself using printables I found online. If you're interested in making your own, just click on the above links.

My Harry Potter Crafts and Decorations 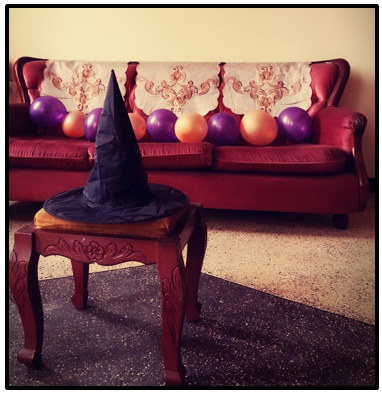 I planned my sister's birthday in a story format with her even getting her own Sorting Ceremony. You can find Sorting Hat replicas online but those tend to be rather pricey and I'm too much of a DIY newbie to attempt making my own. So instead, I just used a regular witch hat which I kept folded for a couple of weeks to give it that beat-up Sorting Hat look. 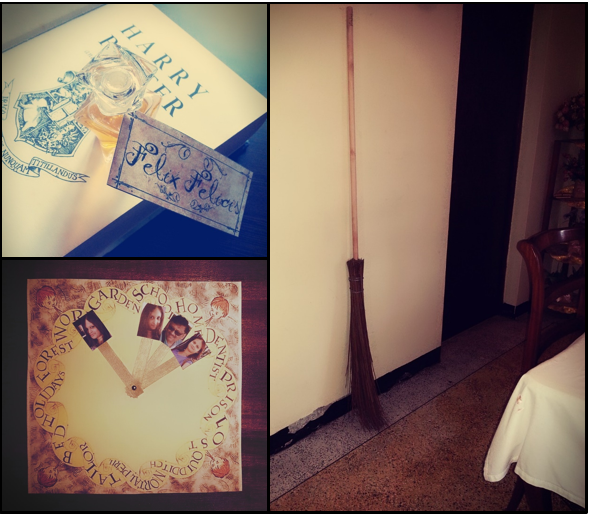 These are the things I made myself. I made a bunch of potions, including the Felix Felicis pictured above, by filling discarded perfume bottles with colored water. I then scattered my little potions on the party table and in different rooms of the house. The Weasley clock (bottom left) was made from a free printable I found online here. The broom from the picture on the right was possibly the hardest to make. There are a lot of YouTube videos that show you how to make your own Quidditch broom but I personally found them too hard to make on my own so I instead went for a simpler model using a normal broom and a mop handle. 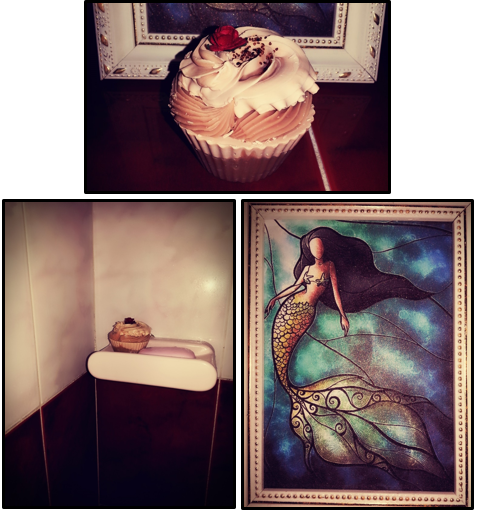 I wanted the magical feeling to last throughout the day, so I put little nods to the Harry Potter universe all over the house... including the bathroom! When my sister went to take her shower in the morning, she was surprised to find a framed mermaid picture in the bathroom along with a cupcake soap with Honeydukes written on the box. The soap is actually from a local shop that sells candy and cake shaped, homemade soaps. Even if you're not from Mauritius, you might still want to visit their Facebook page to look at the pictures of their awesome cupcake soaps.  And yep, they smell just as good as they look! 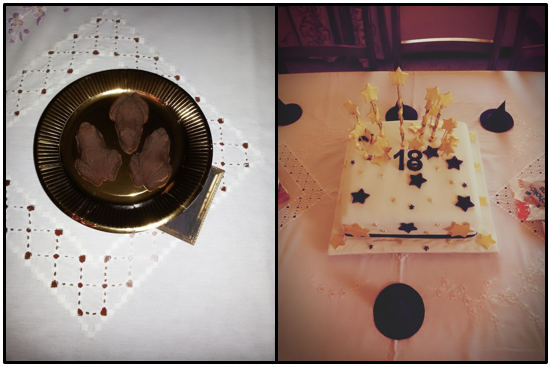 Since this was a HP party, we just had to have Chocolate Frogs. These were surprisingly super easy to make. In an upcoming post I'll tell you how to make your own, including the box and card, with links to free printables for the box and the eBay store selling the frog shaped mold I used. For the birthday cake, I wanted something that remained close to the magic/HP theme and ended up selecting this one because of the stars and color scheme. You can find the original model on which this cake was designed here. 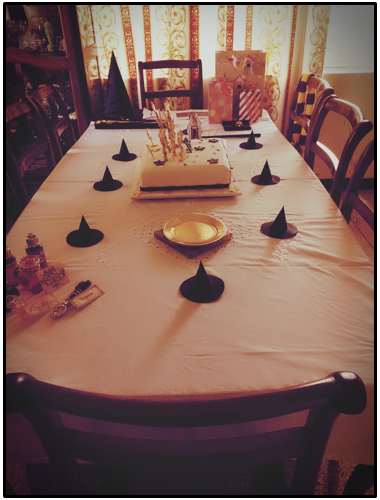 If you look closely, you can spot my homemade potions in the bottom left corner. There's also my Gryffindor scarf draped over a chair in the top right area. 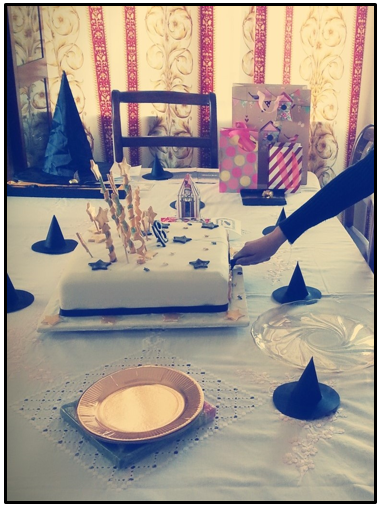 I also had little witch hats as table decorations, which I made out of black paper after cutting out the models for the cone and round base from a free printable I found here. 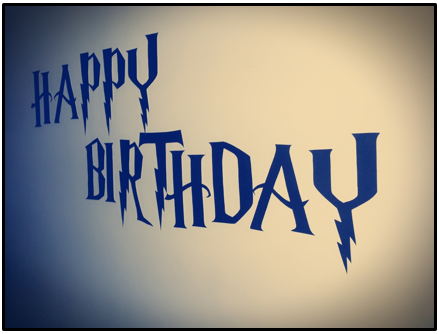 I made this from a HP font I found online. I just printed each letter on a separate page, before cutting and arranging them on the wall to form Happy Birthday. 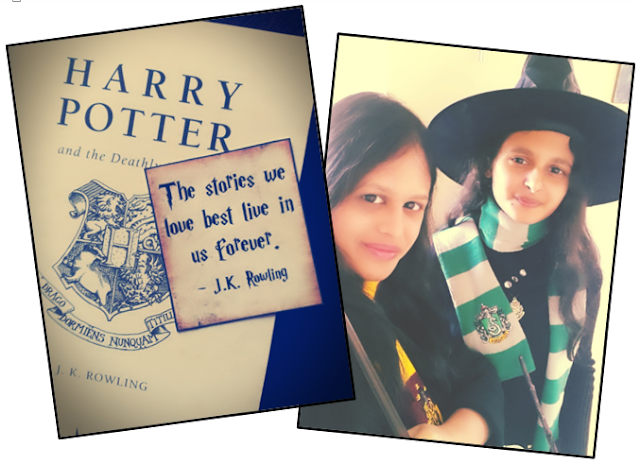 Like I said at the beginning of this post, I may or may not be here to celebrate my sister's birthday next year, so I wanted this one to be really special. Here's a picture of us with our witch garbs. Who said Gryffindor and Slytherin can't hang out?!


Cover Art by Of Stacks and Cups via Pagemodo